Prices for repeat home sales in both Calgary and Edmonton are down significantly from their peaks, according to the latest Teranet–National Bank National Composite House Price Index.

The Index is estimated by tracking observed or registered home prices over time using data collected from public land registries. All dwellings that have been sold at least twice are considered in the calculation of the Index. 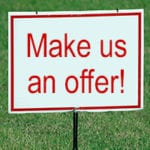 On a month-over-month basis, prices in Calgary were off by 0.33 per cent but rose by 0.06 per cent in Edmonton.

The downtrend of prices has been especially marked in Calgary – 10 consecutive months with no rise, for a cumulative fall of four per cent, said the report.

The index for Edmonton is down 3.1 per cent from last August despite advances in the last two months.

Nationally the Index was flat from the previous month.

“Apart from the 2009 recession period, it was the first April in 21 years of index history in which home prices showed no rise. And the run of months with no rise in the composite index has now extended to eight straight, for a cumulative decline of 1.7 per cent,” said the report.

The 11-market composite index across Canada was up 1.2 per cent from a year earlier.